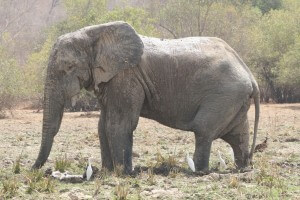 I fell in love with Africa on my first visit to Kenya in the early 1990s.  Africa is a large continent made up of 53 countries.  I have only visited eleven of them, but each has thrilled and captivated me in its own way.  The people, lifestyles, cultures and in some cases the wildlife are the features that keep me coming back.  Since that first visit I have been very fortunate to return to Kenya so many times I lost count, but time and time again I have enjoyed being in touch with  nature and the wildlife that abounds.

My most recent visit to the continent took me to Ghana, a small country located along the western African coast.  The tour I chose was called “Walking with Elephants.”  The name of the tour as well as the accompanying literature implies that you will certainly see elephants while on a walking safari.  Now, in my experience there are no real guarantees when it comes to viewing animals in the wild.  They do not have a union and sign a contract to appear at the designated time and place determined by the safari guide.  They are after all, wild animals.  They do what they want, when they want.  There are factors that help determine your success or failure, such as seasonal weather or migration patterns and time of day.  I would never be so bold as to promise an animal’s appearance.

Amboseli National Park in Kenya is known for its population of elephants and you are most likely going to encounter several during your visit.  Chobe National Park in Botswana boasts some 800 elephants in the park.  This is the only place that I have visited, where I would make a 100% guarantee of an elephant sighting.  The elephant population has become so great there, that they finally had to begin to cull the elephants a few years ago, something they were desperately trying to avoid.  Unfortunately, the population was overtaking the park and destroying virtually all of the vegetation, which other animals also rely on for survival.  They had no choice.  A colleague of mine, who guided tours in Botswana at the same time as I, used to tell his guests that the only person who hadn’t seen elephants in Chobe National Park was Stevie Wonder.

Ghana, however, is not a country known for its abundant wildlife.  They do have National Parks with protected animal populations, but they just aren’t as abundant as those in Kenya, Tanzania, South Africa, Namibia, Botswana and some others known for the safari experience.

We enjoyed many areas of Ghana as we made our way to Mole National Park for the much anticipated walking safari.  Mole National Park is Ghana’s largest wildlife sanctuary.  It was set aside as a reserve in 1958, just one year after Ghana gained independence and was designated a National Park in 1971.   The Mole Motel is the only accommodation in the park and is situated on the escarpment overlooking a watering hole, where the animals may come for a drink particularly during the dry season (October – April).

On the afternoon of my arrival into Mole National Park, I had my first walking safari.  We saw many beautiful birds, such as the colorful bee-eaters.  We watched crocodiles enjoy sunning themselves and then splashing into the water.   There were bushbucks, waterbucks, warthogs and Patas monkeys, but alas, no elephants.

The following morning we tried our luck again.  This time it was a combination driving/walking safari.  After three hours in the park, we were rewarded.  As we approached to watering hold on foot, we found a single elephant enjoying the cool water, as he alternated between drinking and spraying himself.  I have seen many elephants in my lifetime and it is unusual to see one all alone with no others in sight.  But, there he was, all alone in the watering hole with only some vultures and warthogs nearby.

I have since renamed my “walking with elephants” tour to note the singular elephant, but I still enjoyed Ghana and my experience walking with an elephant!

Can a bargain-priced wine be any good??

I don’t like wine, why should I visit a winery?  This question comes up from time to time.  Usually it’s someone that has decided to

Welcome to my Wine-Oh! Blog

Welcome to my first Wine-Oh! blog post.  Let me start by explaining what Wine-Oh! is all about.  This is not for the old school winos,